On Monday the 14th august I got up for my early morning pee stop and went back to bed. I was, at this point, 9 days over my due date and feeling whale like and sluggish. One hour later, I rose for the day and as I did there was a whoosh of liquid from down south. Uncomfortably wet, I showered and dress and didn’t think too much of it because there were no pains, no cramps and certainly no “one born every minute” style drama. I binged watched the first season of Devious Maids and lunch time had arrived.

Man called to check if I was still okay and still pregnant, to which of course my sarcasm replied and told him I thought my waters had broke. He demanded I called the labour ward. I refused, telling him I didn’t want to waste there time, I was having no pains – so on and so forth. Intense name calling and 2 arguments later, I called the labour ward and they told me to make my way in. This was followed by a phone call to man to come get me and a very brash “in your face/told you so” style laugh from him.

Arriving at the hospital at about 4ish, I was examined and told that I wasn’t dilated and they could still feel the waters in front of baby’s head. I assured them my waters had certainly gone and I hadn’t peed my pjs. So they gave me a stretch and sweep, which by the way is not so comfy – not actually that surprising when there is a midwife with her fingers up to your cervix. They told us to go back in the morning and sent us home at 10pm with a pack fully of pads thicker than house bricks (not comfy in your knicks) and some super little thermometer sticks.

It was a sleepless night. Went to bed and had mild cramps, mild enough not to kill and have me doubled over in pain. Which is how it should have gone in my head. Labour was meant to be real noticeable, not niggling mild cramps. But regardless it kept me awake. Got back to the hospital at 6ish for another exam, which proved I’d gotten to 2cm dilated. They offered to “pop the bag” to which I said of course. They did, and I spent the next moments bent over the bed leaking what was left of “the bag”. I kid you not, there is nothing more attractive than a woman leaking amniotic fluid in a maxi dress.

A couple of hours later and another exam. I was no further dilated, but the contractions were getting stronger. They gave me a codeine and ten woosy moments later I projectile vommed over man while trying to aim into a cardboard bowl. Goodbye codeine. Next contraction came and they put an IV in the back of my hand which hurt more than the contraction (which hurt a fair bit). The midwives were sure they were going to induce me, hence the IV. They had me walk to the labour ward from the birth centre (I was really hoping we could stay on the birth centre, but by this point I just wanted to meet my baby). This was a difficult walk. Imagine a bloated old aged John Wayne just off a horse, who had been hit in the Johnson with a red hot sledgehammer and you’ve almost got the perfect picture of how that walk went.

The midwives hooked baby and I up on the monitor. One band for baby’s heart rate and one for the contractions. Handed the gas and air and got told that they are going to arrange the anesthetits to hook me up to an epidural. A couple of hours later, the pain was pretty intense and I informed man that it felt (and i quote) “like someone was trying to jam a football out of my pelvis”. Man said the line on the graph was off the chart, and I remember screaming (something I’ve never done as I wouldn’t class myself as a screamer -but hey, no judgement, it was painful). Man was watching the graph and decided enough time had passed and we needed some assistance. He hit the big red button.

My midwife turned up half hour later and tried to take a look down there. Now, I thought I’d be really conscious about this. People looking at your lady area, but it’s so true what they say about leaving your dignity at the door. I still has my ultra attractive Muppet knickers on (they had Animal on them), and taking them off while contracting was a task! Really though, not an utter shit was given that a strange woman I’d been introduced to once was looking at my vagina – and I’m pretty body conscious. Meanwhile I’m off my face on gas and air. This made me sound like a drunken person trying to not be drunk to get in a club – I swear I dont normally talk that slow but I was trying to avoid slurring.

No time for pain killers, baby wanted to arrive and she was waiting for no induction or anesthetic or pain killers. No pain killers. Remind myself that one must stop whaling and push a watermelon sized human out of va-jay-jay.

1.47pm Delilah Ivy arrived weighing 7.3lb. At 2.40pm ish, after skin to skin and the first feed, mummy was up and in the shower. Now even though I dripped blood across the room floor, and even though Daddy failed at the baby grow, I was feeling more human than I had done for the last 3 weeks and finally we had our little love bug. 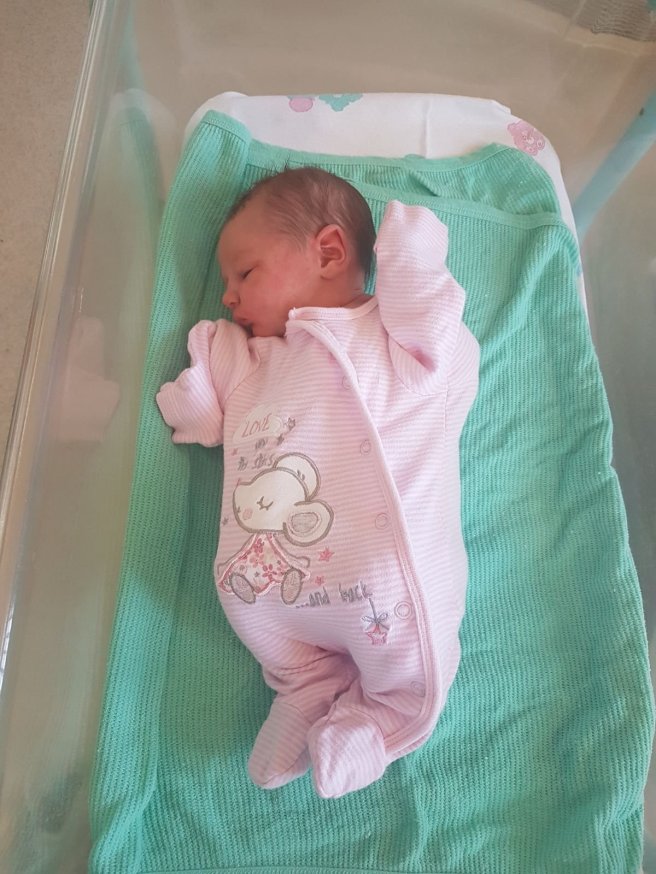