There’s certain things in our life that mould us. Situations that make us react in certain ways and influences everything that happens in our lives. This can be good, bad or indifferent.

I remember in the first year of sixth form I was taking psychology as one of my classes. It was an outside tutor that appeared once weekly to talk about his self and every achievement he had ever accomplished. Class A bell-end. A conceited, haughty, selfimportant twit decided it was his job to preach his life freaking story once a week to a bunch of teens who wanted a psychology A-level.

Despite the douche-bag’s demeanour, psychology was an interesting subject and one that has kept my interest for all these years. I’d complete the reading and homework each week. I’d enjoy the classes; well the content at least, but never the teacher. He wasn’t relaxed enough to have a good report with any of his students and I’m pretty damn sure the rest of my class felt the same way.

We were almost a full year into the course and exam preparation had started. I remember the classroom. We sat in a room in the sixth form building. It was a class of about 15ish students. There was a whiteboard with a projector pointing at it where we would see the pompous bastard’s weekly slides. We’d answer questions in class while discussing the topic of the week. One word answers required or at least simple arguments for or against what ever a study had shown. Each of us took notes, but the class discussions were mainly opinion based.

One particular week the class had been set the task to complete a practice test paper. The test paper was comprised of essay style questions. Long answers. Write in paragraphs, opinions backed up with studies. We had never, in class prepared for this, or been told about it. Each of us tried the best we could and handed it in the following week.

The week after hand in, I wasn’t in class. In was away, at home sick. After he had marked the classes first attempt at the practice papers, there was a mass failing in the air. Every single member of the class did crap. I’m talking no one got higher than a D. Now, as I’ve already mentioned I was away from that class. This, unfortunately for the toolbox teach, was the week he decided to make an example of my work.

He slated my paper for a full 30 mins of a 45 min class. He trash talked me in front of my peers. In front of friends. In front of everyone else who had done equally as badly as I had.

If there was one thing I loved about sixth form, it was the solidarity between students. Despite the clique you belonged to, your social background, whether you got on in high school or hated each other; sixth form happened and against the teachers, the students stood united – no matter what. They told me everything that verbally vomiting, micro organism had said about me and my paper.

I’ve always been good with words on paper (apparently not so much in a psychology practise paper – lol). So naturally I put pen to paper. I wrote a letter and addressed it not only to him but to our head of year. This caused some chaos. He probably regretted using me as a target for the class. Using my work as his shooting range in his highly unapologetical rant at how shit the class he had taught was.

A few point I stated in my letter:

1. Is it fair to make someone who isn’t in the room a victim of your slating in front of their peers?

2. Is it fair to say that speaking about your own life, and how amazing you were to over come the obstacles you have faced has mainly nothing to do with Freud, other psychologists or theories they have presented?

3. If the entire class failed miserably on a practice paper, isn’t this a reflection on the teacher rather than the class?

We were pulled into a meeting to discuss and I let him have it, both bullets in front of the head of sixth form. He apologised (but not publicly) for humiliating me in front on my peers. He offered to re-teach the last year to me in a one-on-one situation to which I replied “I wouldn’t waste my time”. His egotistical nature had him deluded him into thinking he could teach in the first place. I wasn’t going to fall for that one.

I gave my official notice and never attended his class again. At the end of that same term, he was moved on. Now I’m not saying that was my doing. I’m only saying I hope I had a little helping hand in having them realise the man was full of BS.

This incident still holds some resonance with me. I’m still that sassy girl. Quiet, understated and when cornered – a full on queen bitch. And yes, I am proud of that. Sometimes arrogance needs a mirror holding up to its ugly face…. sometimes you have to smash the mirror over that ugly face.

Till this day, I will take so much agro from someone before reacting. I’m okay with that. It builds up, and builds up until I flip the switch and make sure the agro stops. I might be wrong in how I deal with certain situations but it’s the only way I know how.

How would you deal with this situation? What do you do when you’ve had enough of the BS? 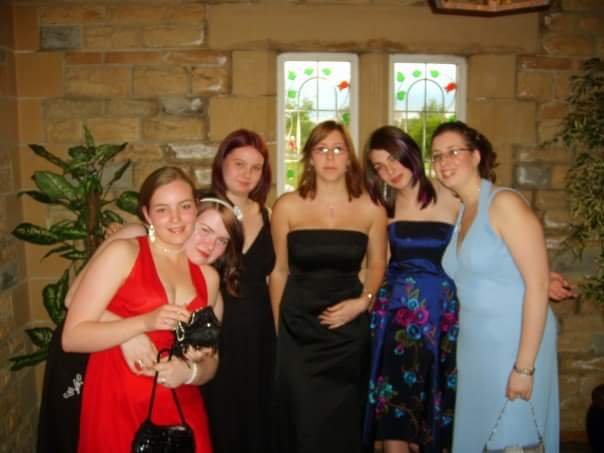 (Some of the sixth form girls, I’m in the red, looking giggly as we had just photo bombed this pic. Each beautiful woman in this picture will always be welcome with me)