I live in a little village in the outskirts of Bradford, West Yorkshire. I’ve lived here my entire life, bar a stint at university. It has always been a sweet place with a decent community. And this is still the case for the most part.

We converse by our Facebook groups, support the local shops and generally have a quiet life style. That is until the last six months to a year, when our village has been terrorized by teen gangs.

It has come to light, especially since the festive period that we are over run by ‘kids’ and their idea of fun. It stops being fun when people are feeling threatened, unsafe and victimised. Some residents have had personal dealings with these ‘kids’ and agreed to speak with me, they shared shocking truths about what had happened.

A source told me: When the weather was icy her younger brother (23) who has Autism, had been targeted. The gang of children threw ice balls at her brother while he was on his motorbike, they hit his helmet and almost knocked him off. He hadn’t been riding long, so his confidence had been knocked by the hit to the head. He continued home to be followed by the group where the abuse continued.

When he had entered his home, the group tried to trash his bike. He went back out to confront them; to tell them to leave his property alone, this is when they picked up steel bars from a near by building site and swung at him. They were about 15 years of age and there were 5 of them in this group. With Autism, there is an increased risk of an angry outburst. With age difference, we all know that the 23 year old would be the one arrested in this situation if anything was to happen.

My source has had multiple dealings with these teens, and continued sharing what had happened.

A daughter, of 3 years old in the house with her mum. The village had icy weather about a month ago and this young family was targeted. The teens threw ice balls at the 3 year old child, who lucky shut the front door before she was hit with the ice.

The same mother was again targeted by our village park. She’s had bricks throw at her, barely missing her face. The police were called. They never came out to the call. This mother has had threats of her home being smashed up, and her car being smashed up.

As residents we shouldn’t have to live in fear of barely legal teenagers. We shouldn’t have to worry about going out after 6pm and being confronted by idiot pre-adults who get a kick out of acts of terrorism. The most punishment these single cell organisms have had, has been a 48 hour ban from the village. [Picture taken from Google] 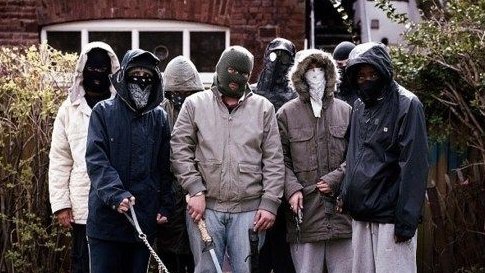 They’ve wrecked buses, bus stops, local family run businesses, bigger stores. They’ve smashed windows of vans and attempted to cause physical harm to residents, and I am sure there are stories we are not privy to. They’ve shot cats with air rifles, and caused harm with fireworks. They’ve stolen and damaged private property. They’ve cause brawls at the local academy and pubs.

We need as a community to realise this isn’t kids playing mischief. This is gang culture. Gangs trying to rule territory and dominate the locals. It has to be time to introduce a more strict way of handling things before vigilante groups start popping up and dealing with issues themselves.

The age of these miscreants shouldn’t matter. If they do the crime, they should be paying the price. I hope that council members can help, I hope that the police can step up and seriously hope that was get our village back.

Have you ever had any dealings with teens like this? It would be great to hear from you and what your opinion is or what you experience has been.

4 thoughts on “Kids or Gang Culture?”